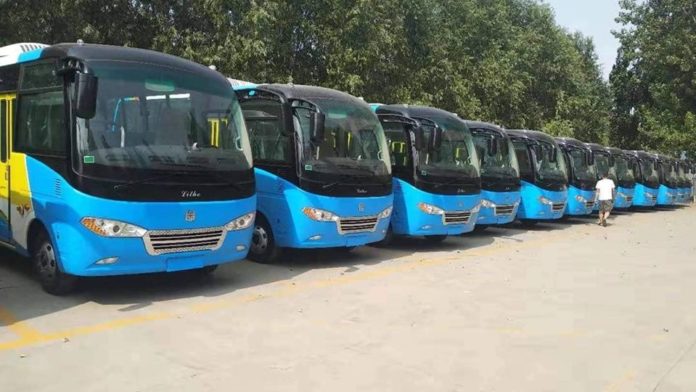 As part of the transportation-overhaul project of the government, the iconic jeepneys are now transformed into “PeoplesJeep” – a modernized version of the PUJ now equipped with GPS, speed limiter, television set, surveillance cameras, and dash camera. Starting today, September 17, 2019, 15 modern jeepneys will begin plying in the streets of the city. This is an addition to the 300 modern Public Utility Vehicles which are already plying around Cebu City and Lapu-lapu City – including hybrid point-to-point buses, modernized taxis, and solar powered jeepneys. These jeepneys will then follow the Talamban-Ayala-Colon, Lahug-Ayala-SM, Bulacao-Colon-SM, and vice versa route. This was according to the statement given by the Chief Executive Officer of Cebu People’s Multi-Purpose Cooperative, Macario Quevedo.

Four PeoplesJeep are now assigned to the given routes and passengers of these modern jeepneys will enjoy free rides during the first two months of dry-run of the 35-seater, Euro-4 powered jeepneys. They will be deployed during the peak hours in the morning and in the afternoon. A minimum fare of P10 will then be collected after the initial operation. Cards will be utilized for the mode of payment; however, a passenger assistance officer will be assigned on board to help in the fare collection for the moment. These cards can be purchased in the Coop branches and some authorized outlets.

According to Quevedo, the cooperative is still looking for professional licensed drivers who are well-versed in driving six-wheeled vehicle for the Bulacao route jeepneys. Additional units of these modern jeepneys will be purchased in the upcoming year with the help of the Development Bank of the Philippines and the Land Bank of the Philippines. Each unit of these PeoplesJeep costs P1.9 million and the coop was able to get 700 franchises from the operators of old jeepneys who have recently joined the cooperative.

Have you experienced riding these modern jeepneys? How was it? Are you amenable to this modernization project?

Nostagic Pinoy Throwback: Things that only the 90’s Kids can relate to