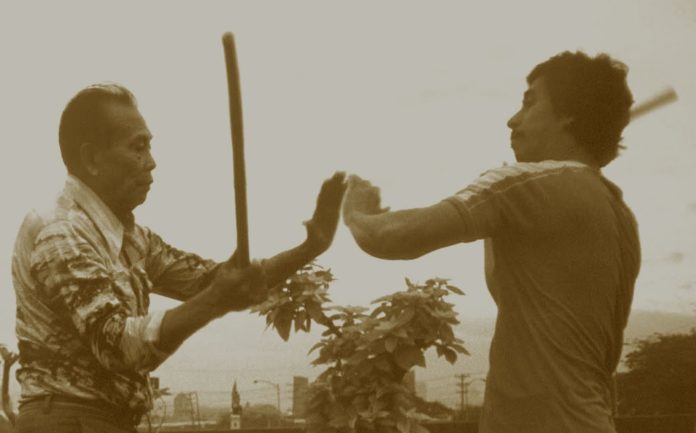 We have been super fans of martial artists like Jackie Chan and Bruce Lee, of wrestlers Hulk Hogan and The Rock, of MMA fighters Anderson Silva and Ronda Rousey, and of boxing champ Manny Pacquiao. But how much do we know of one Antonio “Tatang” Ilustrisimo – a legendary swordsman, a master of Filipino Martial Arts, born in Cebu? 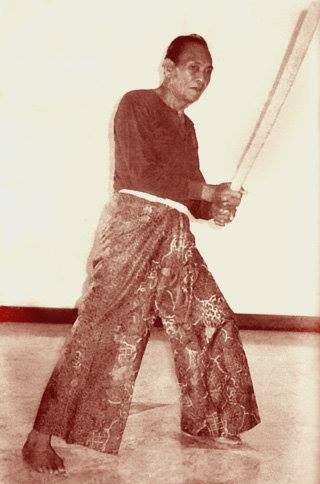 Antonio Ilustrisimo’s combat skills and unusual courage was perhaps partly innate. He was born to a family with a long history of martial and mystical arts. In fact, the Ilustrisimos were recognized as one of the three eskrima clans in Cebu during the time, along with the Saavedras and the Romos. Pablo Ilustrisimo was known to be the first in the family to practice eskrima. Pablo then passed the skill to Juan de Dios Ilustrisimo, who passed it to Isidro, Melecio and Regino Ilustrisimo.

Antonio’s paternal uncles, Regino and Melecio Ilustrisimo, were martial arts masters. Regino became an arnis master in Stockton, USA while Melecio became a famous Kali master in the Philippines and especially popular in Central Visayas (Cebu and Bohol) at the turn of the 20th century. Much of Antonio’s early eskrima training he got from his father, Isidro Illustrisimo, and from his uncles.

Whatever the young Antonio learned from his father and uncles, he passed on to younger family members including his cousin, Floro Villabrialle, who became a renowned Filipino arnis master in Hawaii, and his grandnephew, Samuel Ilustrisimo.

A master in the making, Antonio was truly fit in the courts of kings (or in this case, of sultans). Although only nine, he was already very ambitious and adventurous. He dreamed of setting foot on American soil and making a name for himself there. Deprived of his family’s permission and blessing, the young Antonio took a boat out to sea with nothing but some of his family’s money and a machete.

Little did he know that the land of milk and honey was thousands of miles away and cannot be reached by a lowly paddle boat rowed by a boy of nine.

While paddling in the open sea, Antonio chanced upon a ship and agreed to sail with its crew, visiting various local ports. In one of the ports, the young Antonio met a family friend, a Muslim, who brought him to Jolo, Sulu in Mindanao where Antonio’s transitioned from boyhood to manhood.

As his physical body developed, his combat and eskrima skills did too. According to accounts, he was later adopted by Hadji Butu, a Sultan of Sulu and the first Muslim senator of the Philippines. There, Antonio took the Muslim name, Montesali.

While at the Sultan’s courts, Antonio further honed his combat skills alongside Moro warriors and Pedro Cortes, a famous martial arts master of Mindanao and a former sparring partner of Antonio’s father.

Antonio’s first actual fight and kill took place in Jolo, Sulu. At 17, he had already mastered kali using the “barong”, the Tausug national sword – a leaf-shaped blade esteemed for its ability to sever an arm, leg or neck with a single blow. Unmindful of the Islamic restriction against drinking, Antonio had some beer but was reprimanded by another Muslim. The two had a couple of heated exchanges and ended up drawing each of their Tausug swords.

The opponent was skillful, but teenaged Antonio was nimble and clever. Using the “tumbada” technique of parrying and cutting simultaneously, Antonio instantly beheaded his opponent.

Although it was a gentleman’s fight, Antonio was intoxicated – a big no-no in Muslim law. To prevent inter-clan war, his adoptive Sultan father paid blood money and sent Antonio on exile to Cebu.

Antonio was back to his home province and was reunited with his family. But this reunion was rather brief. Antonio seemed to grow restless when on safe harbor, in the confines of his hometown. He returned to sailing and traveled extensively.

Grandmaster Antonio Ilustrisimo never stopped training and perfecting his combat skills. He would join arnis matches in barrio fiestas, and even fought grand masters in other countries such as Singapore, India, America, Europe and Australia. Albeit his undefeated position in the martial arts arena, Antonio would rather fight naturally, without restrictions, without combat pads or armor, and fight according to specific terms of defeat, which may mean a fight to the death.

According to Tatang, during an interview with Australasian Fighting Arts Magazine (AFAM), “the fancy stuff in arnis, all the flowery movements, is only for stage shows and demonstrations, not for real fighting.” He would go on to explain that “training for tournaments is not training for real fighting. Wearing armor is bad for the art, students don’t learn well.”

It seemed that wherever he went, violence would follow. His stay in Manila was no different. Living in Tondo, he was surrounded with muggers, robbers, bullies and criminals. It was even said that Antonio, along with martial artists Floro Villabraille, Jose Mena and Felicissimo Dizon, formed the group “Gang of Four”, an alleged “De Facto Dock Police” who cleared the docks of bad elements.

Perhaps the most talked about story of Antonio’s life in Manila was when he was 40 or 50 years old and working at a local port. The middle-aged Antonio had dispatched a port bully nicknamed “Doming” who threatened a friend’s life.

Antonio had agreed to standby and to witness his friend stand up to Doming, but to come to his friend’s aid in case the latter loses. The port bully was good with knives and instantly disarmed Antonio’s friend. To save his friend, Antonio took out a short iron pipe hidden beneath his long sleeve and rammed it on the back of the bully’s neck three times. It was a fatal strike. The bully died. Antonio’s friend admitted the murder.

Meanwhile, ship operators rejoiced over the bully’s death. In gratitude, they made Antonio a ship officer eligible to sail on international waters. When on furloughs, Antonio would rejoin his long time friends, participate in matches and train some more. Grandmaster Antonio Ilustrisimo was yet to accept students for he was not keen at teaching others his craft until his senior years.

As a seasoned martial artist, Antonio had a hard time finding worthy opponents, even sparring partners. His invitations to a fight were often rejected or declined. In an AFAM interview, Tatang said no one wanted to fight him and recalled his real fight was at Dock 8 with the bully Doming who he killed with a pipe.

When the WWII broke, Antonio had the opportunity to put his combat skills to practical use. He became a guerilla fighter and killed so many Japanese soldiers at the time with his kali techniques. He was said to have never been defeated in battle and thus earned the nicknames, “Executioner” and “Dagohoy” (with respect to Francisco Dagohoy, hero of Bohol).

Grandmaster Antonio Ilustrisimo was no ordinary eskrima warrior. Together with his superb combat skills, it was told he possessed special powers through the use of “anting-anting” (amulet) and “oracion” (incantation). He would spend Good Fridays testing his special powers in empty lots.

Romeo “Romy” Macapagal, one of Tatang’s notable students” said that he did saw anting-anting and oracion at work while training with the grandmaster. Romy cited one instance where Tatang asked him to write an oracion to protect the former from blade cuts.  The oracion worked. Romy never had a cut despite working with blades and training kali. Only Tatang could hurt him. However, the oracion negatively affected Romy’s finances. When Romy got rid of the oracion “armadura” or armor, his finances improved and became vulnerable to blades once again.

Antonio Ilustrisimo will forever be remembered for “Kalis Ilustrisimo” aka The Bladed Art of Ilustrisimo. The legendary grandmaster had perfected the use of bladed weapons in eskrima and had passed on the knowledge to several students, who call him “Tatang” or grandfather.

Though he did teach young relatives in Bantayan Island while a young boy, Tatang initially never wanted to teach others what he knew. Tatang wanted to keep his combat secrets to himself. He would get incessant requests from prospect tutees, but it was only in the 70s when Tatang finally disclosed his art.

They say Tatang lived and died poor. Perhaps this was the downside to him practicing his mystical powers (much like what happened to Romy). However, his legacy will live forever. Though bereft of money, Tatang left behind a rich legacy handed down to every dedicated student of Kalis Ilustrisimo.

Tatang lived in a time where it was necessary for each man to learn self defense, where mastering martial arts was a requirement for survival. Amid all the violence surrounding him, Tatang was a lover of life and surprisingly gentle. He admonished his students to dispatch only the crooks of society, following Bushido, the code of the Samurai warrior.

Fellow Cebuanos, if you are looking for a martial arts idol, look no more. Cebu is home to several masters of eskrima. And Antonio “Tatang” Ilustrisimo is simply too iconic to overlook.