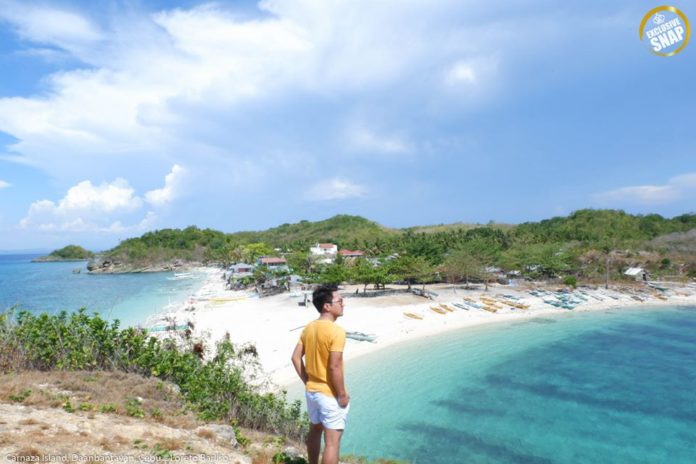 It’s not news how summer in the Philippines can get extremely hot and yet we all get excited about it because it means more time to bum around on the beach. This time of the year is when we all just want to soak up the sun, swim and dip in the waters or just lay around the beach doing nothing. Cebu is ideal for many – both local and foreign travelers alike for when it comes to beach bumming or exploring the ocean under.

We have a whole lot of beautiful, serene white sand beaches all over the island from north to south. And my favorite ones are those that aren’t too commercialized and are left untouched by big hotel chains and resorts. One of which unspoiled and stunning white sand beaches are the Carnaza Island in the northern part of Cebu.

Carnaza Island is a small island situated at the topmost of Cebu, it’s a bit further north of Malapascua Island. From an aerial view, the beautiful island is shaped like a turtle and that’s so cute. The island is partially covered in low mountains and rain forests which are great for trekking. And surrounded by teal waters and fine white sand that’s oh so tempting.

The island has a couple of nice places to go to on your visit to the island. These are the Kailina Beach, Airplane Island, Dakit-Dakit Island, Cementeryo Cove, Baliwanan, Daan Barrio Cove, Barrio 1 and 2 Coves, Kambalaki Cove, Gamayng Baybay Cove, Candionesio Cove, Liog-Liog Cove, Skull Cove, and the Carnaza Eco Park Resort.

The entrance fee in Kailina Beach is Php 20 per person. And for those who choose to camp here, you’ll have to pay Php 150 per person. The beach doesn’t have any restroom though, but you can ask Kuya Edie if you could use their toilet. They would also be happy to cook your food for you but be sure to pay them accordingly and thank them.

This tiny island can be found near the Cementeryo Cove. You’ll have to climb up a karst hill to take a good look at the island – which looks like an airplane that landed in the ocean. It actually looks pretty cool, so be sure to check this one out.

A few minutes of boat ride from Carnaza Island, one can reach Dakit-Dakit Island which is also called the Maria Island. From Carnaza Island, you’ll be able to spot the Dakit-Dakit Island because it’s right in the southeastern part. It’s made of rocks and has this formation, sea snakes are said to be seen on some parts of the island as well. You will be able to spot it on your boat ride going back to the Daanbantayan.

This cove is located right after Barrio 1 and 2 and serves as the residents’ cemetery. Hence the name; also a few minutes of walk to the karst hill, you’d be able to have a good view of the Airplane Island.

Baliwanan is situated right beside Cementeryo Cove, and close to the Airplane Island. The spot has nice crystal clear waters that are great for swimming and snorkeling. It has a few soluble rocks scattered around and has rich sea life so it’s nice to swim and look around under the sea here.

Daan Barrio Cove is located right next to Barrio 1 and 2. It’s usually where the passenger boats dock off, if not in Barrio 1. There’s a smaller stretch of white sand here and is where most people reside. It’s not ideal for swimming because of the residents in the area.

The Barrio 1 and 2 Cove is right before you get to the Cementeryo Cove and the place you’ll see something that looks like a cave pool from a higher point of view. This cove is where you’ll spot most of the residents on the island and is surrounded by coconut trees, with lots of boats on the shoreline. There’s also a nice cliff on this cove which is great for those who’d want to do some cliff diving on to the sea.

The Kambalaki Cove is another one of the quiet and reserved beach areas on the island. There’s a short stretch of white sandy beach and lush green trees on the background – which is so relaxing and looks like a nice spot for a picnic.

Gamayng Baybay when translated to Cebuano, means “small bay” – which is what this cove is. Just a small cove with rock formations that’s nice to look at and take photos in.

The Candionesio Cove has a long stretch of nice white sand, clear blue waters and also a couple of houses. The place looks so peaceful and is so dreamy. Wouldn’t it be nice to live in a place similar to this? Ahh! Just living simply and enjoying the nice ocean view day by day sounds really nice. The right portion of this cove is said to belong to the Osmeñas, so it’s restricted to the public. Some private boats dock off on the public area of this cove.

Some people refer to this cove as the Liog-Liog Twin Beach because when you look at it from a higher point of view, you’ll see the stunning twin beach. The two beaches are connected by a stretch of sandbar leading to this huge rock. And in this huge rock, you will find more wonders – a small cave and a natural pool. Be sure to wear proper beach footwear to avoid getting cuts from the sharp rock. And also be a confident swimmer if you want to take a swim in the natural pool as it is deep even when it’s low tide.

The Skull Cove is amazing in its simplicity, with a nice white sand beach, crystal clear waters and has two caves formed close to each other. One cave has a small pool, while the other one holds human skulls that were said to be found inside the cave. That’s probably how the cave got its name. According to the locals, during World War II, the place used to be a meeting place and as a shelter for the Japanese Military Personnel.

The Carnaza Eco Park Resort is the most common choice for people who want to spend the night on the island. It’s formerly known as Kambinaldo, a private beach resort by the Osmeñas. The eco-park resort has stirred up a lot of attention from netizens since they opened to the public. Many travelers are enticed to visit and explore the island, especially with its wooden tents – which look like teepees and make for a nice photo backdrop.

Moreover, there is a nice lagoon just behind the tents and buildings of the resort. That and the nice panoramic view of the ocean, a nice stretch of white sand and oh the gazillion stars you will absolutely be mesmerized with at night.

Carnaza Island on a Budget

It’s best that you explore the island on foot, it’s a nice way to appreciate the beauty of the island and be proud of yourselves for reaching one cove to another. The island isn’t big so for sure, you will not have a hard time wandering around. It’s also nice if you find a local to guide you and tell you about the stories on the island.

When going on a trip to the island, it’s always better to bring your own food with you so you won’t have to worry. However, you can also choose to buy fresh fish/ seafood from fishermen and cook them yourselves. That, or ask some residents to cook it for you, be sure to pay them though. 🙂 There are also a few other options for dining on the island.

There is one restaurant in Carnaza Island, it’s called Psalms Restaurant. It’s located in Daan Barrio and very near Kailina Beach. The food they have at the restaurant are reasonably priced, nothing over Php 200. You can also charge your gadgets when you eat at their restaurant. Apparently, they can also deliver food orders within the island. For order inquiries and deliveries, you may contact them through 0925 485 4616/ 0906 320 3326.

There are a couple of options for those who wish to spend a night or two on the island. These are the following:

Things to note/ Other helpful tips

Carnaza Island is a part of the Daanbantayan municipality of Cebu.

Go to Cebu North Bus Terminal and get on a bus bound for Maya. Tell the driver or conductor to drop you off at the Tapilon Proper. The travel time estimate is from 4 to 5 hours.

When you get to the Tapilon Proper, head on to the pantalan/ port. You may walk all the way there or get on a pedicab/ trisikad.

Then at the pantalan, get on a boat that will take you to Carnaza Island. The boat trip will take an hour or two, depending on the waves.

Malapascua Island – How to Get There, What to Do, and Insider Tips

Malapascua Island – How to Get There, What to Do, and...