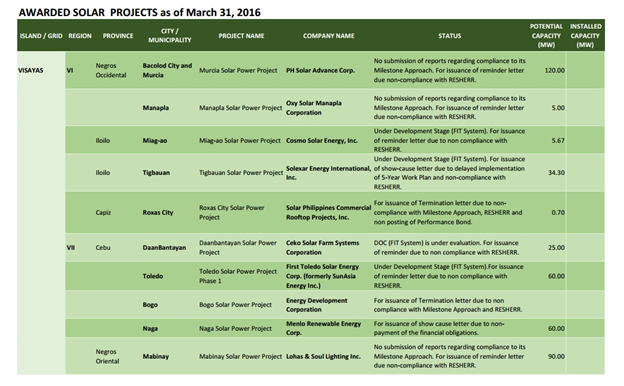 We may know Toledo City for its copper mines and coal-fired power plants, but this quaint city is also home to what would be the largest solar power plant in Cebu. First Toledo Solar is expected to reduce carbon emissions by 1.72 million metric tons in 20 years. It recently obtained P4.375-billion loan from the Development Bank of the Philippines as partial funding for its construction. The plant is currently eyeing eligibility in the Feed-in-Tariff Program and is dispatching power to the Wholesale Electricity Spot Market.

Located in Baltao Farms, the solar power plant’s infrastructures were set up covering 35% of the 111-hectare farm, with modules slightly raised above the ground allowing small animals to graze and take shelter under the panels. Grasses thrive in between open spaces while coconut trees tower and fence the field area. This plant’s design enables poultry and livestock to thrive alongside the power plant’s infrastructures.

CeKo Solar, a Filipino-Korean collaboration, was supposed to be a promising investment that will provide some 300 jobs and help in the recovery of storm-stricken Daanbantayan. It signed a memorandum of agreement with the local government in October 2014, barely a year after Typhoon Yolanda hit the northern town of Cebu. Groundbreaking took place on September 25, 2015. Construction works were to start right away so the plant will be operational by middle of 2016.

Unfortunately, the project was halted in January 2016 for failing to meet standards under the Milestone Approach and the Renewable Energy Safety, Health and Environment Rules and Regulations (RESHERR). CeKo Solar was supposed to be the first solar power plant in Cebu, way ahead of First Toledo Solar. As of March 31, 2016, CeKo Solar construction is under the watchful eye of the DOE.

As of March 31, 2016, DOE reports the Bogo solar power project is “For issuance of Termination letter due to non compliance with Milestone Approach and RESHERR”. Nevertheless, it was reported on May 23, 2016 that the “project was complying with the Milestone Approach”. Also, it was reported on November 14, 2016, that the Bogo solar power project (of Sun Premier Philippine Corp.) obtained clearance from the DOE. 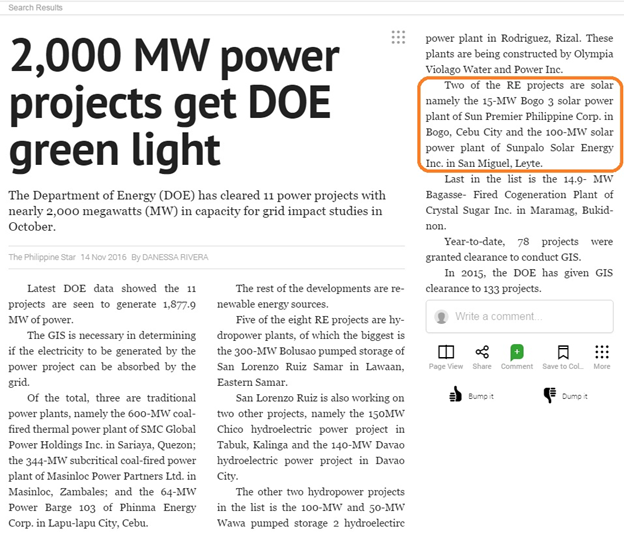 Incorporated in May 2015, MREN will utilize the 160-hectare industrial lot in Naga, Cebu owned by its parent company MRC Allied Inc. and set up a 60-MW solar power plant. It has yet to start its operations. However, as of March 31, 2016, the DOE reported that MREN was behind its financial obligations and will be issued show cause letter due to nonpayment.

As of August 2016, MRC’s board of directors has raised the company’s authorized capital from P1.5 billion to P5 billion. The capital increase will help fund MRC’s renewable energy projects, including MREN in Naga.

On January 25, 2017, MREN board’s has approved a resolution increasing the company’s capital stock from P100 million to P500 million. At the same time, mother company MRC appointed Atty. Gladys N. Nalda as its new president, leading the company towards being “a major player in the renewable energy industry”. These corporate changes are critical in solving MREN’s financial woes and push forward with the solar power plant’s construction and eventually operation.

We’ve looked at four solar power plants across the province of Cebu, and we’re excited.  But more renewable energy projects are soon to rise within the province, specifically in these locations:

These projects, estimated to provide at least 100 MW in power, are awaiting approval from the DOE. The DOE disclosed that committed power projects as of June 2016 will generate 607.4 MW of energy, 295.1 MW of which will come from solar power projects. Things are truly getting brighter here in this part of the country. Imagine a third of our power comes from renewable energy sources.

Renewable energy projects such as these play a major role in meeting the increasing power demand within the province and throughout Central Visayas. During the first half of 2016, power consumption in Cebu increased 10% to 1.87 billion Kilowatt-hour (Kwh) from the same period in 2015.

As we can see, the construction of a solar power plant is no easy feat. Aside from it being capital-intensive (standard cost of generating 1 MW is $1 million to $2 million), designing and constructing a solar power plant must undergo and meet stringent standards. Let’s hope and pray these solar power projects will obtain the necessary funding, comply with design standards, and go commercial smoothly.

Got useful information or know updates about these solar power plants? Feel free to share them with us through the comment section below. Photos of the progress of plant construction are very much welcome (please indicate source so we can credit photo owner).