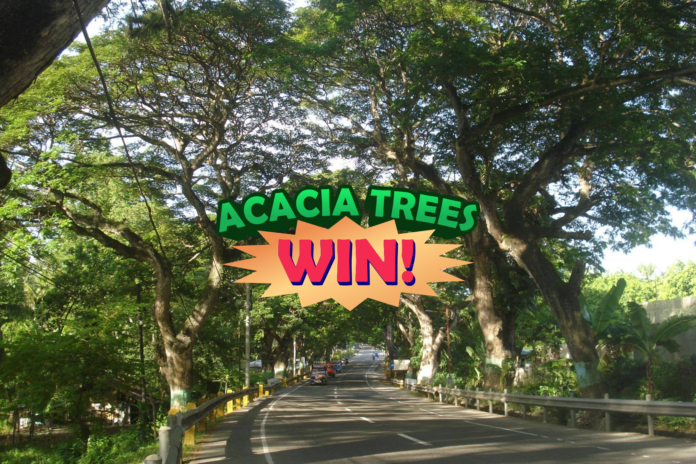 The petitions and campaigns made by Cebuanos to save the centuries-old heritage trees in Carcar City have been heard. On a post shared by DPWH-7 Chief Legal Officer, Brandon Ray Raya, he shared that these heritage trees in Perrelous, Carcar City, Cebu will be preserved as roads will not be widened, instead a new road will be opened alongside.

This stemmed after seeing the effect of the declaration of DPWH to cut trees on M. Velez, Barangay Capitol Site and F. Sotto Drive from Gorordo to General Maxilom Avenue for the ongoing road widening projects in the city. These trees were scheduled for removal yesterday, October 15. However, because of the commotions created by Cebuanos against the cutting of trees for the road widening project – the Metro Cebu Expressway Project – that would connect the southern city to Danao City (a 73-kilometers highway), an immediate response was made.

It can be recalled that petitions were made online on change.org and petitiontime.com along with offline efforts to save these trees. As of this writing, a total of 22,908 signatures were already gathered on Change.org alone. This is an addition to the Temporary Protection Order filed by lawyer Benjamin Cabrido to the court of appeals in Cebu City to direct the Department of Environment and Natural Resources and the Department of Public Works and Highways to cease and desist from implementing all tree cutting permits nationwide and to stop the ongoing cutting and removal of these trees. These trees are part of the culture and heritage of many Cebuanos. Aside from environmental protection, these trees have long provided shade and resources to many locals of Cebu.

In addition to this success, Percical Fiel, officer-in-charge of CENRO, also shared that the trees in the City of Naga will not be cut as well, but only trimmed.

33-Man Medical Team from Armed Forces of The Philippines Arrives in...