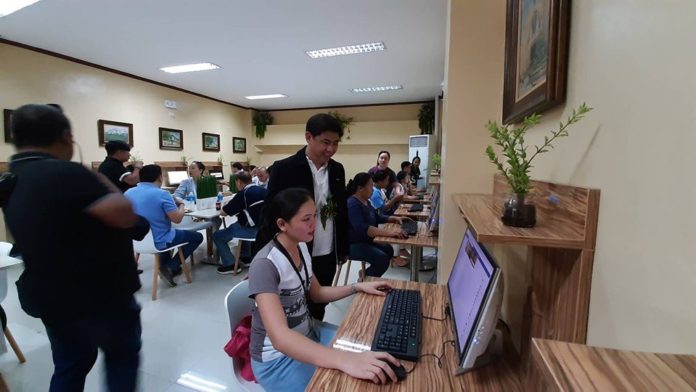 There’s no more reason for students not to study, do research, and submit requirements for school because Lapu-lapu City has opened the first government-run e-Library in Cebu! Now, students can use computers and print documents for FREE.

The E-library is a project spearheaded by Lapu-lapu City Mayor Junard Chan. He partnered with PLDT-Smart Communication in opening this E-library which is located near Hoopsdome, right in front of Police Station 3 in Gun-ob, Lapu-lapu City. The air-conditioned room has free-to-use 20 modern personal computers (CPU built-in to monitor) which were donated by the Lapu-lapu Chinese Guild led by President Shouqi Zhao. The facility offers free WiFi connection and printing for students from the city. A lounge area was also provided for those who want to use their own laptops, tablets, or mobile phones. In addition, an IT personnel and person-in-charge of the E-library will also be assigned to oversee the whole operation; while eight security guards are also deployed for safety and security purposes. It will be opened 24/7 to accommodate everyone from Lapu-lapu City.

However, to make sure that the facility will be utilized properly and won’t be abused, Lapu-lapu City mayor has limited the use of the facility for two hours. Social media sites, online games, and movie downloading sites are also blocked in the E-library so to encourage students to focus on their studies and research.

Mayor Chan shared that he first conceptualized the e-Library when he was still the barangay captain of Pajo. His thoughts were on the welfare of the less fortunate students who really can’t afford doing research in the internet cafés. According to him, the e-library is just the first phase of this project as an adjacent room will be added wherein 30 additional computers will be installed. This will be maximized as a Call Center Academy which will provide free training to those who plan to work in the BPO industry.