Christmas and New Year celebrations may be over, and most people are back to their routine. But, in Cebu City, the party continues through until the third Sunday of January during the Sinulog Festival and several weeks thereafter to hold post-fiesta events such as awarding ceremonies and photo exhibits.

This year 2017, the Queen City of the South will celebrate the 37th year of the Sinulog, the city’s biggest celebration yet. Although already a famous festival, there’s more to Sinulog than street parades and dancing. Here are some interesting facts about Cebu’s Sinulog Festival.

Cebu’s Sinulog is not the only fiesta in the country that commemorates the Santo Niño.

Cebu isn’t alone when it comes to honoring the Santo Niño. Tourists and guests from all over the country and abroad may flock to Cebu City every third Sunday of January to join the Sinulog festivities, other cities also hold their own fiestas in honor of the Holy Child. For instance, there is the Dinagyang Festival in Iloilo (4th Sunday of January) and the Ati-Atihan Festival in Kalibo, Aklan (3rd Sunday of January).

Santo Niño de Cebu (Holy Child of Cebu) is the oldest Christian relic in the country. Ferdinand Magellan, a Portuguese explorer commissioned by the King of Spain, arrived on the shores of Homonhon in the Philippines on March 16, 1521. He and his men then visited Cebu (then called Zebu) on April 7, 1521. He successfully converted the royalties of Cebu, Raja Humabon and his wife, Hara Amihan, to Christianity and gifted them an image of the Holy Child, now housed at the Basilica Menore de Santo Niño in Cebu.

The source of the Sinulog dance movements was Rajah Humabon’s adviser. 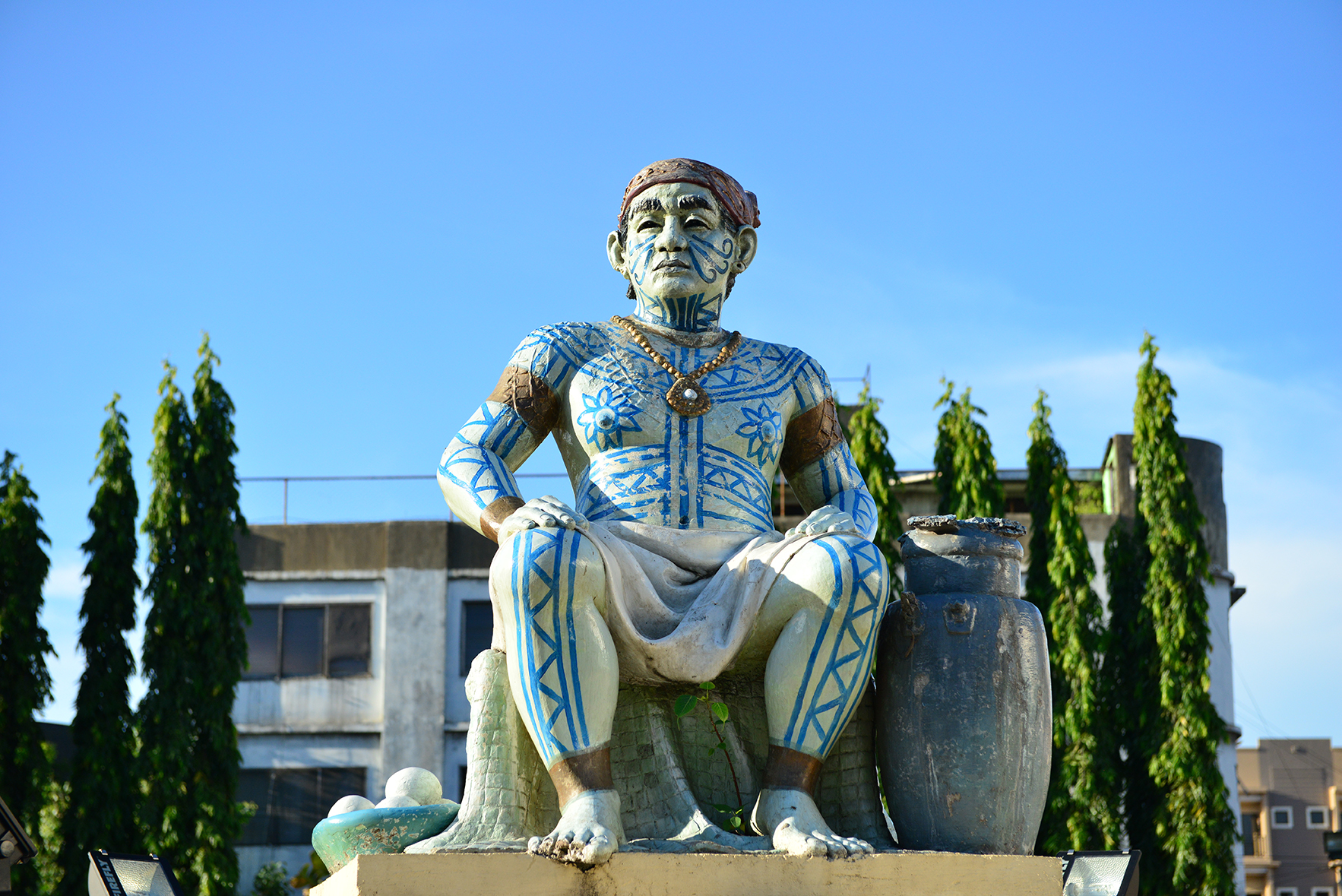 Stories have it that Rajah Humabon’s advisor, Baladhay, had gotten sick but was miraculously healed by the Santo Niño. In gratitude, Baladhay danced with joy and performed a ritualistic back and forth step with arms praising God, a movement resembling that of the water current or “sulog”. From that moment on, the distinctive Sinulog dance was born.

Conversely, some claim that the early Filipinos prior Magellan’s arrival were already performing the Sinulog dance to honor pagan gods. Upon conversion to Christianity, the people started to dedicate the same dance to the Santo Niño.

The first Sinulog Parade was held only in 1980, 459 years after Magellan’s arrival.

It’s amazing how many centuries it took for Cebu to finally conceptualize this remarkable festival for the Child Jesus. Thanks to then Regional Director of the Ministry of Sports and Youth Development (MYSD), David Odilao Jr., the first Sinulog parade was held from Plaza Independencia and was joined by at least seven educational institutions in Cebu.

However, some historic accounts allegedly recorded during the Legaspi expedition say the first parade of the Santo Niño was held in 1565 in Tupas village.

The success of the first Sinulog Parade inspired what’s now the grandest festival in Cebu.

That’s right. The 1980 Sinulog Parade proved to be a huge success. Organizers started planning a much grander and more festive Sinulog celebration the following year. In 1981, the Queen City of the South celebrated the first Sinulog Festival.

Sinulog spectators and Santo Niño devotees flock to Cebu City by the millions.

Rain or shine, in spite of other similar festivities and other religious events in other parts of the country, Cebu’s Sinulog Festival reels in millions of guests every year. One testament was Sinulog 2015, where some 1.8 millions of people came to witness and join in the festivities amidst Pope Francis’ visitation in Manila.

The expression “Viva Pit Senyor!” has a very significant and religious meaning.

Viva means long live. Pit is the shortened version of the Cebuano word “sangpit” (or “panangpit”), which means call. Senyor refers to the Señor Santo Niño or the Holy Child Jesus. So whenever you hear the phrase “Viva Pit Senyor!” it means “Long live, call on the Lord Jesus!” It’s a three-word phrase symbolizing deep devotion and zealousness among the devotees of the Santo Niño.

Mayor Osmeña, in the hopes for a more peaceful and more frugal celebration, had announced several changes to this year’s Sinulog Festival, including the scrapping of the Sinulog sa Kabataan and Miss Cebu. A lot of people didn’t agree with the mayor’s proposition. Eventually, this year’s Sinulog pushes through with the Sinulog sa Kabataan and Miss Cebu, shorter parade routes and earlier finish times are to be expected. The city is also on lookout against rowdy and unruly behavior. We have yet to see how this year’s festivities will turn out.

Know more about the schedule of activities and other relevant information about the 2017 Sinulog Festival. Visit the Cebu City website. A happy and peaceful Sinulog celebration to all of us. Viva Pit Senyor!

#PritititQCC2019: Everything You Need To Know About Sinulog 2019

#PritititQCC2019: Everything You Need To Know About Sinulog 2019