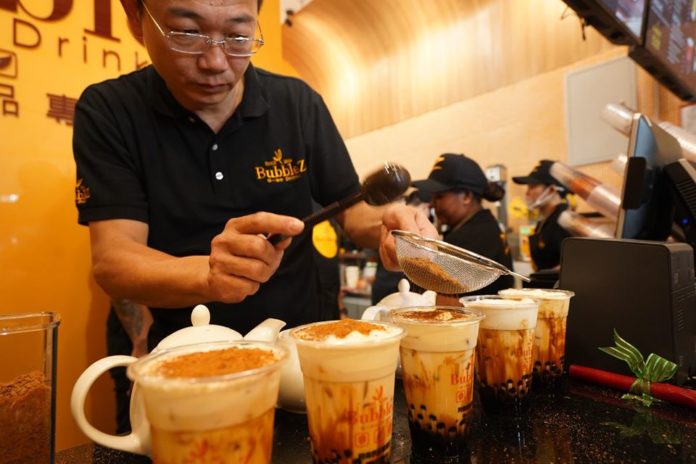 Knowing that you clicked on this article, you’re likely to be a milk tea lover or drinker. I like Jasmine Milk Tea in particular and it’s always my main choice whenever I go to the mall. It’s like this special treat I give myself for trying to be a good mommy, you know. Hah! And I have thought and wondered where milk tea originated and how it became so popular everywhere in the world.

The yummy and highly-addictive drink from Taiwan has spread around the globe – from Japan to Malaysia, to the Philippines, the US, Australia, in Europe, and South Africa. The number of milk tea stands and cafes have sprung up like mushrooms everywhere around the world. You may also notice that here in the Philippines – wherever you go, there is a milk tea cafe just around the corner.

It’s nice to see how this type of tea preparation has become a sensation in its land of origin and also overseas. You must be wondering who first came up with adding tapioca balls in the tea. Read on…

READ: Zozzle Tea: Get Zozzled at The Newest and Coolest Milk Tea Shop in Town

The milk tea drink has already been a popular drink choice in Taiwan since tea drinking is a strong practice in East Asia. A number of tea companies claim to be the creator of bubble tea that’s why it’s not clear who is the true founder of the famous drink.

However, Liu Hanchie of the Chun Shui Tang Teahouse in Taichung claimed that in the early 80s he experimented with cold milk tea. He added some fruits, syrup, candied yams, and tapioca bubbles or now commonly called ‘bobas’.

What is Boba milk tea?

Boba milk tea, also known as Bubble tea or Pearl milk tea, is a tea-based drink that originated in Taichung, Taiwan in the 1980s. The term bubble was derived from the bōbà – a Chinese word which meant large and is slang for the chewy tapioca balls which were usually added to the drink.

The milk tea drink is usually served with an oversized straw and is also likely to be sweet and refreshing. This cold beverage can be made with any type of tea — my favorite’s Jasmine or Oolong. And also typically, your cup will be filled with jellylike pearls or bobas. Some cafes or stalls offer more options now though, you can have pudding added or glass jelly instead of boba pearls.

It’s 2020 – 12 years after the milk tea started becoming popular all over the country and our love for it is at its peak. The number of milk tea lovers keep increasing as milk coffee bars keep coming up with their broad menus and lots of different choices to choose from. These days, it’s more common to see somebody drink milk tea at least once a week or have it delivered right to their doorsteps.

Since the 90s, pearl milk tea has become a huge craze around the globe – especially in Southeast Asia. This is probably caused by the increasing popularity of street cafes and the cafe industry like Starbucks, and other famous coffee brands.

The milk tea trend, however, cooled down for a while in the early 2000s – but abruptly rose back into popularity when Serenitea, Happy Lemon, and other pioneering milk tea companies opened up their branches in the Philippines. While in other neighboring countries – Chatime, Koi, Tiger Sugar, Xin Fu Tang, and The Alley opened up in cities around Asia.

These milk tea cafes offered high-quality teas, real milk, and a cozy atmosphere. Can you remember how people would literally line up and wait for hours just to get their cup of tea? I know I do, and it still happens nowadays when there’s a new milk tea brand on the market.

Moreover, Taiwan has made an official holiday called National Bubble Tea Day, celebrated on the 30th of April.

It’s not so clear yet as to how this drink obsession remained and stuck with many people across the globe – while many other drinks have faded and were eventually forgotten. Perhaps it’s the wide variety of choices one can make when having their cup of milk tea blended. Or it could be that it’s the ideal drink-snack combo for on-the-go Asians. Or maybe it could be the perfect combination of the chewy texture of the tapioca balls and the creaminess of the milk tea that got people hooked.

As the popular drink became more widespread locally in Taiwan and everywhere else in the world, boba milk tea began to evolve. There’s the Fruit bubble tea – which uses fruit powders and syrups, but later on, fresh ingredients were used in making them.

Today’s bubble tea is typically made in two forms: a fruity, iced tea – consists of fresh fruit, tea, and ice; and there’s a smooth milkshake-like tea – made by mixing tea, milk, powder or liquid flavoring, creamer, water, and ice.

The topping options for bubble tea have also expanded through the years. It started from tapioca balls, now there’s sago, grass jelly, aloe, coffee jelly, almond jelly, egg custard, konjac, and red beans. Also, the traditional chewy tapioca balls which were black in color can now be found in white, transparent, or different other colors – depending on the ingredients they were made from.

More recently the brown sugar pearl milk tea became the latest craze – it’s a syrupy treat made with fresh cold milk, brown sugar caramel, and tapioca pearls. In countries like Singapore, you will also find variants of milk tea with a local twist – like salted egg custard and avocado. While in Japan, you will see youngsters sipping on Hojicha latte bubble tea.

While the origins may be a little uncertain, one thing’s for sure – the boba milk tea trend is here to stay as shop owners continue to find ways to invent new and bold flavors to excite the market. It’s also obvious how the drink is highly addictive or you’ll start to crave it once you try it. If you’ve had one, you’ll definitely know what I mean.

Luckily, we have lots of milk tea stalls and cafes around when we have those milk tea cravings. And what more is that the delivery options are now available – have milk tea delivered right to your homes. Ahhh! Yum! ♥

Gatsa.a Milk Tea: Is It Worth Trying?

Gatsa.a Milk Tea: Is It Worth Trying?