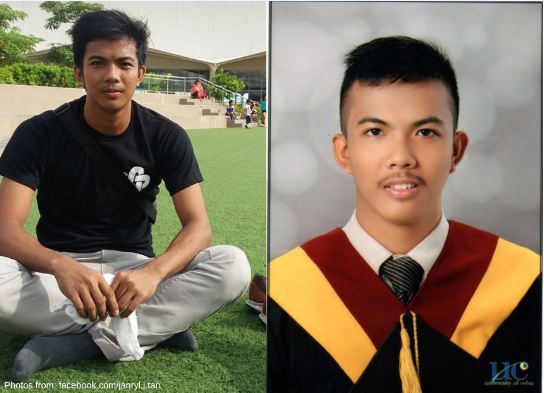 Being a student is never easy. With all the demands and requirements needed to be attended to, sure it’s easy to complain and give up. It’s easier to blame teachers for their lack of consideration and for not giving ‘enough’ time. Much more if you’re the one working to finance your own studies.

Last March 20,Coming from a poor family, Janryl has to work as a village watchman or tanod in Barangay Kalubihan, Cebu City to earn additional amount to finance for his tuition fee.

Janryl was raised in Alubijid, Misamis Oriental without the comfort of a real shelter. And even with such feat, he graduated as valedictorian in Grade School and High School. They have been moving to different houses and sometimes ended up on stalls to take refuge. He remembered having to move almost 13 times. When his father and siblings moved here in Cebu, they were housed by some relatives in Barangay Labangon but at some point they also considered living in the stalls of “Tabo sa Banay” in downtown Cebu. Later on, they took shelther at the multi-purpose hall of Kalubihan Barangay Hall where they maximized the benches for sleeping. What added to this struggle was when his brothers died because of dengue.

To suffice the needs of the family, his father worked as a Lupong Tagapamayapa in Barangay Kalubihan but his honorarium was not enough to send Janryl to college. Good thing he was able to pass as CHED scholar wherein he received P15,000 every semester. But this was not enough as tuition fee would somehow range from P19,000 to P23,000. Seeing the determination of his son to finish his studies, his father suggested for him to apply as tanod in their barangay. There he earned an additional P6,500 honorarium.

He began attending college at daytime and worked as tanod at night. He joined patrol groups that attend to the needs of the residents, closely monitor CCTV cameras, and write blotter reports. As the second youngest of the team, Janryl found it quite difficult to roam around the realms of the barangay and apprehend petty criminals; good thing, he was duly supported by other tanods. After doing his rounds, he would then take his free time to do his assignments and studies. The whole barangay including Barangay Captain Rex Millan takes pride of this achievement as it only shows that nothing can hinder a committed heart. Not only that he brought pride to his barangay, he was also able to inspire struggling students as well.

Janryl admitted that he once dreamt of becoming an athlete who would represent the country for international competitions, but this eventually changed when he realized the situation of his family. His dream of building their house became his priority; hence the course taken. As of the moment, Janryl plans to continue serving as barangay tanod who ensures security and peace and order in their community to finance for his review and upcoming board examination.

Truly, poverty should never become a hindrance to success. In the words of Janryl, you have to pursue your dream, be resilient and positive at all times. You have to become more understanding of your parents’ situation instead of complaining for your inconveniences. You have to work for your dream.

Fun Fact: Did You Know that Cebuano Wikipedia is the Second Largest Edition of Wikipedia?