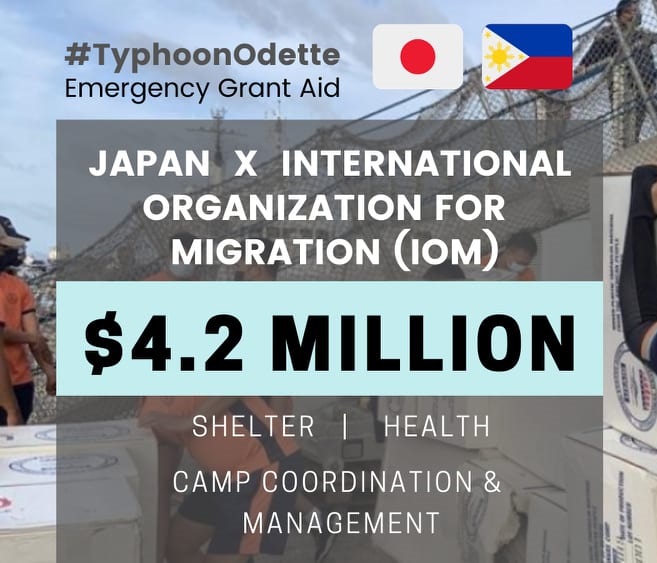 To provide a safer environment to the victims of Typhoon Odette, the Japanese Government and International Organization for Migration have agreed to implement a $4.2 million (approximately P215.9 million) assistance to provinces that were heavily hit by the recent calamity. The said amount is dedicated to provid shelter kits, health clinic support, as well as medical equipment to the displaced and vulnerable victims of the typhoon.

This project is part of the $13 million (around P663 million) Emergency Grand Aid released by the Government of Japan – provided through multiple international organizations – in response to the damages caused by Typhoon Odette in the country. Aside from IOM, other implementing agencies that took part in the said aid include World Food Program ($5M), International Federation of Red Cross and Red Crescent Societies ($1.83M), United Nations Children’s Fund (1.6M), United Nations Office for the Coordination of Humanitarian Affairs ($0.2M), and Office of the United Nations High Commissioner for Refugees ($0.17M).

It can be recalled that the Japanese Government, through JICA (Japan International Cooperation Agency), has immediately provided an emergency assistance pack inclusive of generators, sleeping mats, and dome tents to those greatly hit by the onslaught of Typhoon Odette.

The Japanese Embassy in Manila said that their country is fully committed to supporting the Philippine Government and its people particularly in these struggling times given its amicable relations. The intended budget of $4.2 million will be utilized to fund shelter repair kits that will be distributed to at least 2,420 households, camp coordination and management for 4,000 internally displaced individuals in 20 evacuation sites, capacity building for 7,400 people, operation of mobile clinics, and the procurement of emergency medical equipment for four health facilities. All these are in partnership with the Catholic Relief Services and CARE Philippines – hopefully, to benefit an estimated number 64, 681 Filipinos affected by Typhoon Odette.