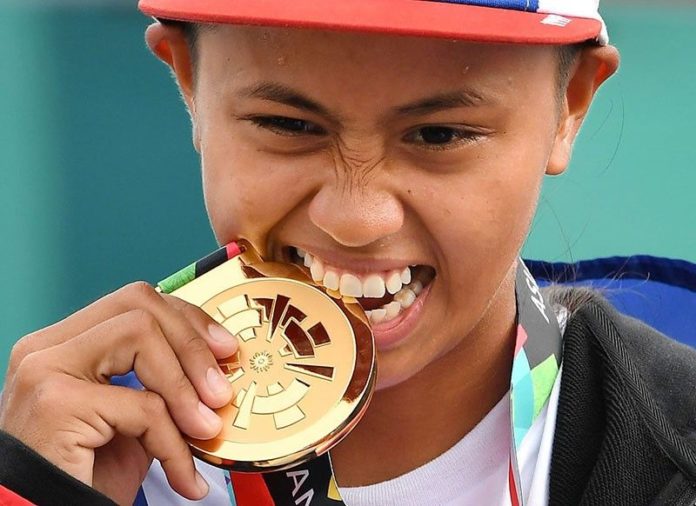 Despite the pandemic and delayed training, top Filipino skateboarder, Margielyn Didal remains hopeful to qualify for the 2021 Tokyo Olympics. The 21-year-old Cebu-based athlete aims to compete and represent the Philippines in the Olympics.

As there is only a maximum of 20 qualifiers allowed for every event – for both men’s park street and women’s park and street – Didal has to make the cut by either becoming part of the top three of the World Championships this year or earn enough Olympic ranking points and become one of the top 16 in the world rankings for the women’s street event.

Unfortunately, the 2018 Asian Games gold medalist who also won twin golds in the 2019 SEA Games has been confining at home ever since the pandemic shelved the World Skate Olympic qualifiers in March of last year. She was supposed to head to the States to compete for qualifiers but then the country went on lockdown. As a result, she was not able to skate for much for months.

Didal then later settled by practicing in the huge space in their house and a makeshift ramp behind her room as training grounds. While it is totally different from the real skate parks as there are lots of obstacles and space to hurdle with, she remains optimistic.

Didal won silver in the recent virtual Madrid Urban Sports tournament last month before she earned the nominations as the “Skater of the Year” in the 2020 Asia Skateboarding Awards. She currently ranks No. 14 in the Street Olympic rankings and may still join boxers Eumir Marcial and Irish Magno, gymnast Carlos Yulo, and pole vaulter Ernest Obiena if she makes the cut off within the Top 16 on June 30. This means she has to compete in as many tournaments as to keep up with the Olympic hunt.

“I hope this pandemic will be over soon and things will be better soon; so, all the athletes can train and compete,” Didal shared. “I’ll try my best to get there and I’ll try to get a medal.”