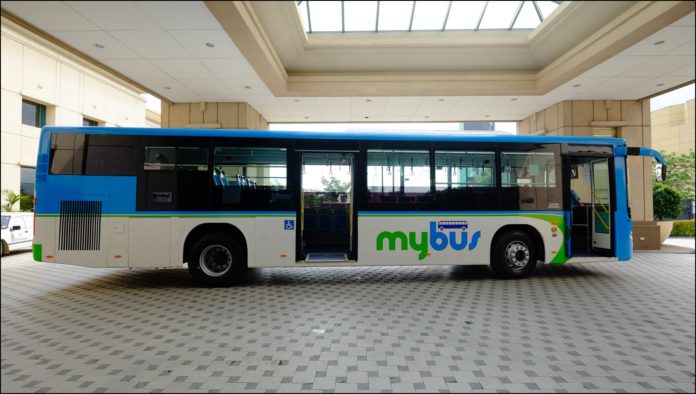 In efforts of alleviating the heavy traffic and assuring safety among the people traveling to and from Cebu City, a better public transportation has been realized through a joint venture of SM Prime Holdings Inc., and Jam Liner – the Cebu myBus. Owned and operated by Metro Rapid Transit Services, this budget-friendly, GPS and CCTV enabled means of transportation can accommodate 42 to 90 passengers (including those who are standing) from Mactan International Airport, South Road Properties, Talisay, and within the Cebu City area.

Upon its launching, 33 buses were immediately deployed and has grown up to 77 buses as of present. These Volvo, Mercedez, and Daewoo manufactured myBuses adapted an on-board tapping fare collection using the myBus card. Passengers were encouraged to buy the myBuscard but cash was accepted as part of the transition until May 2018. Multiple tapping on a single card, however is still allowed. These cards are sold at P200 with an initial load of P100. Reloading on selected stations can be done by hundreds. Recently, IT Park worked together with the Cebu City government under the leadership of Mayor Tomas Osmeña in deploying three buses for free for graveyard shift employees starting January 30, 2019. On the memorandum of agreement signed by Metro Rapid Transit System Inc. and Cebu City government, additional buses will be lent for this purpose in which the government will shoulder the fuel allocation.

Reminder: Schedules and routes may change without further notice.