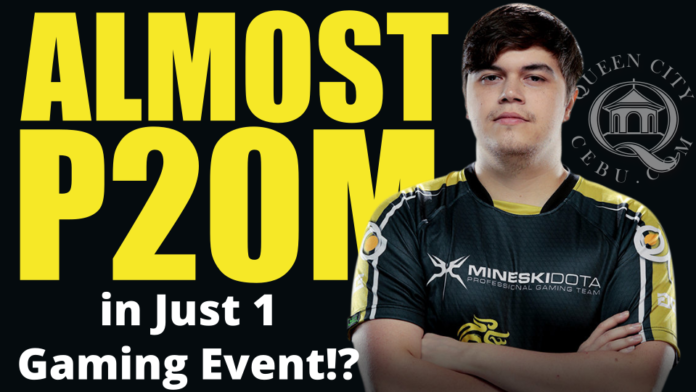 I’m sure you’re probably thinking the title is merely clickbait right? Well, it ain’t. And the best part? The video gamer and his team that DID NOT EVEN WIN this one (1) tournament! Imagine that?!

This is the new reality and is one of the many reasons most of the kids these days are nowhere near them “hangouts” we used to be at during the 80s and the 90s (think billiard halls, basketball courts, etc.).

Fact is, my 10 year old son and ALL (as in everyone) of his contemporaries I asked, as well as the other titos’ kids of the same age, are now saying they want to do something that’s related to the video gaming scene when they grow up with becoming a “streamer” or a “youtuber” as the easiest answer.

For the uninitiated, a streamer is someone who usually plays video games and records or shares it live on a streaming platform like Twitch, Youtube or Facebook.

A Youtuber on the other hand is someone who just does the same but not limited to games with “unboxing” toys being one of the best examples thanks to many a handful of kids like this 7 year old who earned an estimated $11M on Youtube in 2017 alone.

Do you notice the same trend with your kids and the kids you meet these days?

Being a competitive video gamer myself since the 80s and having represented the country for more than 5 years or so in the game Starcraft Brood War, it’s not uncommon for me to get questions from other titos and titas regarding the subject with the most common being, “how do I stop my child from video gaming?”.

Addiction is also a common word that comes up when these talks happen and I’m more than prepared for it given I’ve lived it way more than most of my contemporaries have.

All that said, it’s no question video gaming is a subject most people (young and old) can relate to these days and fortunately, is our subject for our very first Queen City Cebu Inspires program!

Queen City Cebu Inspires is an interview program we’ll be rolling out that aims to not just inspire fellow Cebuanos but also impart to them the lessons coming fro prominent Cebuanos in their respected fields.

And on the subject of video gaming, nobody could come close to how far Michael “ninjaboogie” Ross in terms of winnings. In fact, just last year, his team earned US$ 382,983.00 for placing 9-12th in the biggest gaming tournament in the world, The Internationals.

If you’ve seen how gaming interviews go, you’ll be surprised how different this one goes. It has everything both the gamers and the parents of today and even the government can learn from and hopefully enjoy.

Gamers can show the video to their parents so they can understand better that this has the “potential” to become a full blown career choice.

Parents on the other hand can show this to their kids so they’ll understand that becoming a professional at this takes a lot of sacrifice just like any professional sports endeavor does and even if you do have that dedication, you have to understand only a handful can actually succeed at it.

You have a much highest chance at becoming a doctor or a lawyer that’s if statistics tell us anything.

I don’t want to give you everything by text so by all means do check out the full interview below and please don’t forget to share it to people you know will get something out of it.

Our first episode of Queen City Cebu Inspires is finally out! This special features prominent Cebuanos who can hopefully inspire others and give them insights on how they got to the level of success they’ve achieved!

Special thanks to everyone that has helped make this happen: