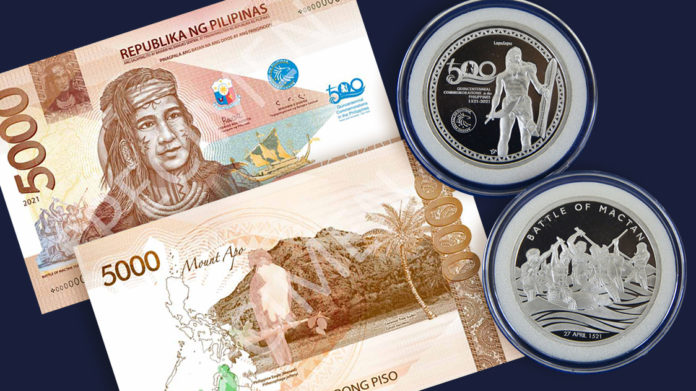 Paying tribute to the historic hero of Cebu who drove away the Spaniards 500 years ago, the Bangko Sentral ng Pilipinas launched earlier today the commemorative P5,000 banknote and medal. This is a part of the Quincentennial commemoration of the Battle of Mactan and a way of giving Raha Lapu-lapu the honor he truly deserves.

Features of the P5,000 Lapu-lapu Banknote and Silver Medal

This launching of the BSP also kicks off the 99-day countdown to the actual anniversary of the epic battle on the island of Mactan.

As discussed by the BSP Deputy Governor Francisco Dakila, the P5,000 Lapu-lapu banknote includes artist Carlo Caacbay’s rendition Lapu-lapu’s image on the front part of the bill (in accordance to archival records and contemporary resources), the Philippine Eagle on its back, and the usual security features of the other Philippine banknotes.

The P5,000 bill also depicts the Karaoka, the warship believed to be used during the pre-colonial period, a coconut tree – of which fruit was fed to the great navigator, Ferdinand Magellan, and his crew. The grandfather of all Philippine mountains is also featured on this bill.

It is however important to note that the P5,000 banknote is not meant for circulation – but will be available for purchase by the public. For details, BSP will release a separate advisory come March this year for guidelines as to how this commemorative banknote can be purchased.

Along with the P5,000 banknote, a commemorative medal made primarily of silver was also launched. This features the Lapu-lapu Shrine in Cebu on its front part, while the Battle of Mactan dated 27 April, 1521 can be found on its back.

Dakila emphasized the importance of paying tribute to the industrious Filipinos who contributed to making the Philippines free and prosperous; hence, the collaboration of the BSP and National Quincentennial Committee for this said event.

Monuments, shrines, and museums are often built to perpetuate the memory of our heroes – as well as to promote their principles and values that they fought for. To keep alive the courage and values of Raha Lapu-lapu, aside from the P5,000 banknote, a Lapu-lapu Museum is currently being built on the island of Mactan while the proposal of changing the name of Cebu-Mactan International Airport into Lapu-lapu International Airport is also at work in Congress.