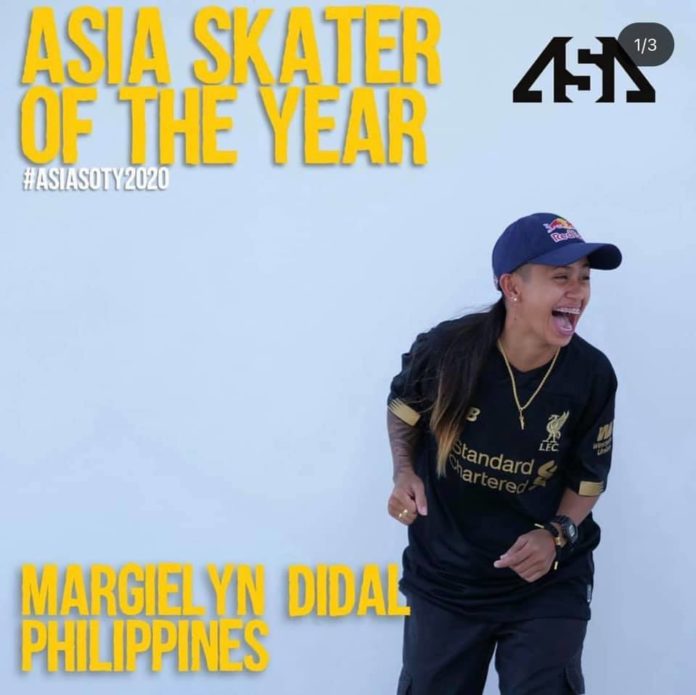 Margielyn Didal continues to make waves in the international scene as she recently bagged the ‘Women’s Asia Skater of the Year’ title this week in the recently held 2020 Asia Skate Awards. She reigned over the 60 other competing top skateboarders from 20+ countries across Asia.

The homegrown 21-year-old Cebuana takes home the cash prize of $1,500 for winning the aforementioned competition. Aside from that, she also receives an additional $300 for championing the ‘Style for Miles and Fastest Feet’ in the East categories.

“This is awesome. Thank you so much,” was Didal’s response to this latest achievement.

Didal beat other candidates, including fellow Filipino Cindy Lou Serna, and other skaters hailing from China, Thailand, Indonesia, and Japan. Japan’s representative for the Tokyo Olympics, Aori Nishimura, and 2018 Asian Games’ youngest medalist (at the age of 12), Nyimas Bunga Cinta were also nominated for the said award.

Other Filipinos, Mark Feliciano, Daryl Dominguez, and Daniel Ledermann were also nominated for the ‘Men’s Asia Skater of the Year’ category but it was Japan’s Shin Sanbongi who bagged the award.

At present, Didal, one of TIME Magazine’s 25 Most Influential Teens in 2018 and 2020 Forbes Asia ’30 under 30 list for Sports and Entertainment, continues to pave her way by training in Cebu in hopes of qualifying for the Tokyo Olympics that is to happen later this year. She currently ranks 14th in the world. It can be recalled that only the top 16 in the world rankings can earn a ticket to the Olympics along with the top 3 winners in the World Championships and 1 from the host country, Japan.

The 2018 Asian Games and double Southeast Asian Games gold medalist was supposed to compete in Peru and resume her bid for the Olympics in the year-opening qualifiers. However, because of the COVID-19 pandemic, the event was canceled and she was forced to train in Cebu ever since the lockdown last March 2020.

Now, with the easing of travel restrictions, Didal gets to train with national team members Cindy Serna and Mak Feliciano in the newly completed training facility built for skaters like them.