Cebu Philippines Ultimate Travel & Food Guide
Facebook
Twitter
Pinterest
WhatsApp
Cebu is famous for homegrown delicacies that are great as bring-home gifts or “pasalubong” as we all call it. Travelers visiting the island would take something home with them to share it with their friends and families. This is a great way to give them a bit of taste of what Cebu has to offer.
Also, the locals who visit other places or go abroad would bring something home with them – another reason is that so they won’t get too homesick. There are all sorts of food or material souvenirs available in malls, groceries, terminals, sea, and airports. And for the twenty plus years that I’ve been living in Cebu, when we think of a good place to shop for pasalubong, there are two names that come to mind so quickly – Titay’s and Shamrock.

In 1907, the Frasco’s great-grand-mother/ lola Titay baked these unique ring-shaped cookies called Rosquillos and sold them in her bakeshop. The name came from the Spanish word “rosca” that means ringlet. The unique shape and good taste of this simple dessert are what made Titay’s be one of the most famous delicacy makers for Cebuanos and other Visayans from one generation to the other. 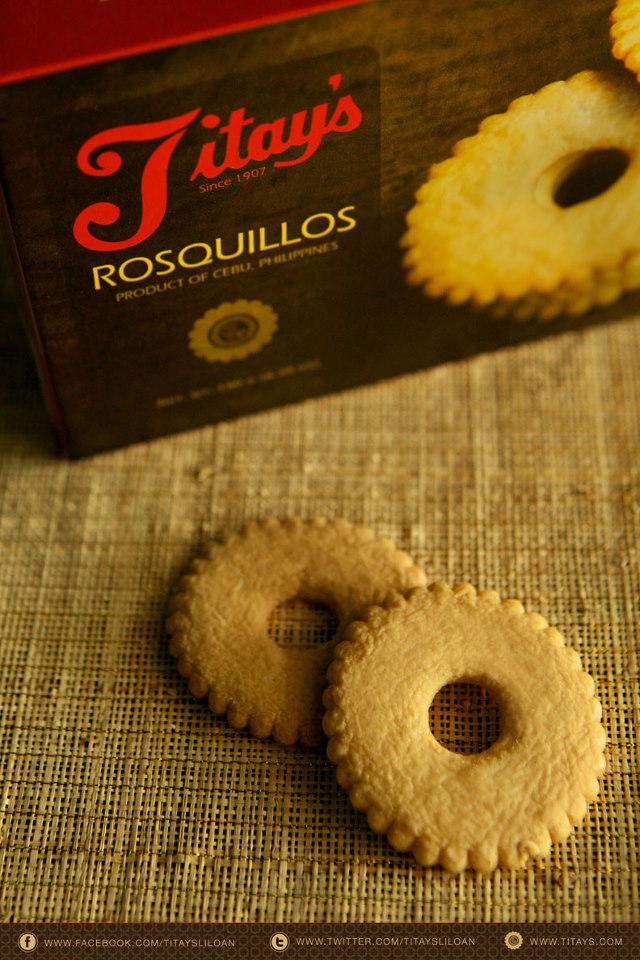 The bakery business was managed like any other small businesses in the old countryside of northern Cebu. Later on, in 1999, grandmother Corazon “Azon” Frasco inherited the business and during her time, more products were added such as pastries, biscuits, and bread. Mama Corazon brought rosquillos closer to the Cebuano market by distributing them in supermarkets and malls. 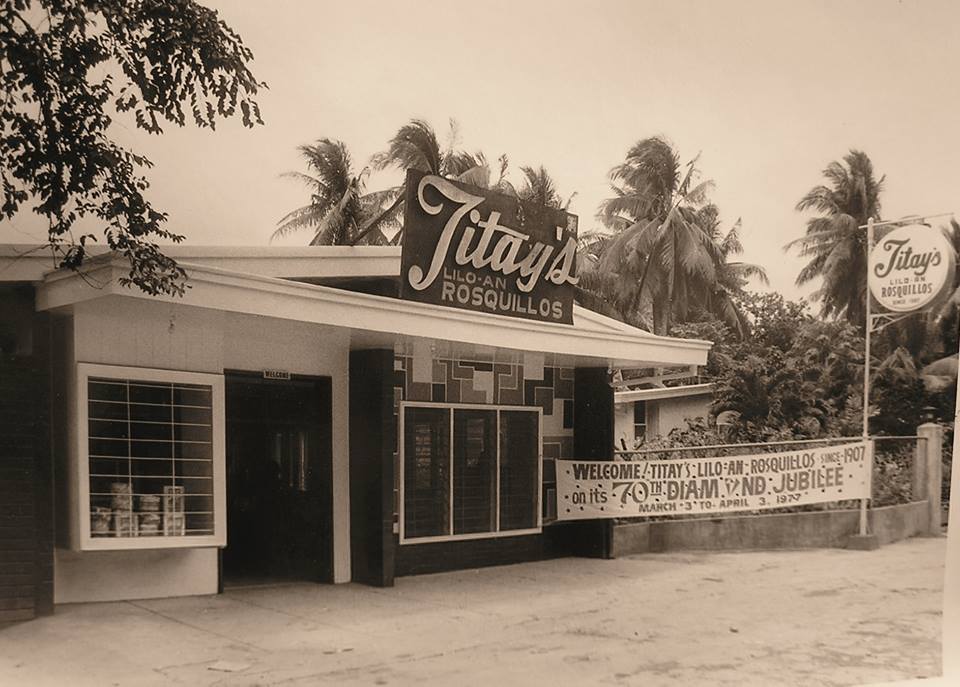 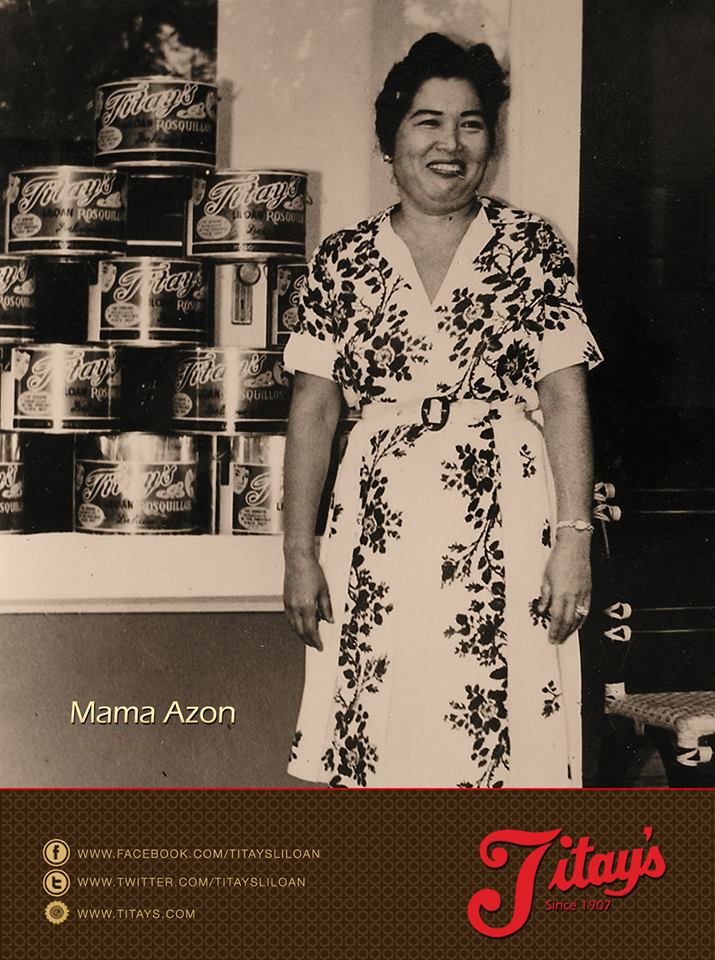 For quite some time the family was satisfied with the typical bake and sell. They didn’t really invest so much on marketing their brand. Then the business was passed on to Gerardo and Panfil Frasco – the third generation.

In 2013, the fourth generation has laid out and reintroduced the brand not only to Cebuano market but to the whole nation. They began rebranding Titay’s as one of the top pasalubong choices in the country. They altered and modernized their packaging and their operations.

The Frasco family of Liloan has revamped their main branch into a café. This alteration came about as their way to adapt to the changing consumer habits – wherein they are willing to spend on quality products and experience.

The simple bakeshop/ store used to only have six tables and could only cater to several guests at a time. The CEO of Titay’s Liloan Rosquillos and Delicacies Inc., Aljew Fernando Frasco said their family made the decision to transform the store into a café to cater to more guests.

Today, their cafe can now accommodate up to 45 customers and they’ve added additional products in their line of desserts and goodies. Titay’s now offers hot and cold beverages like juices and other pastries in their new café.

Their brand may have become famous for their round, scallop-edged, ring-shaped biscuit known as Rosquillos. However, over the years they have expanded and put out other delicacies such as otap, galletas del carmen, peñato, banana chips, polvoron, barquillos, bread, and pastries into the market. 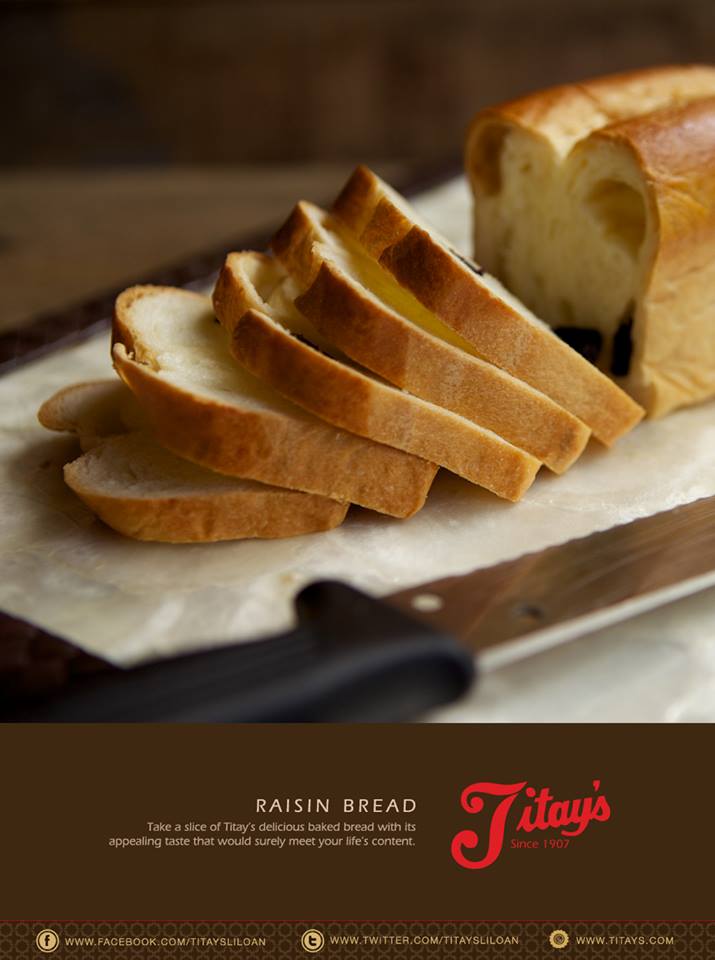 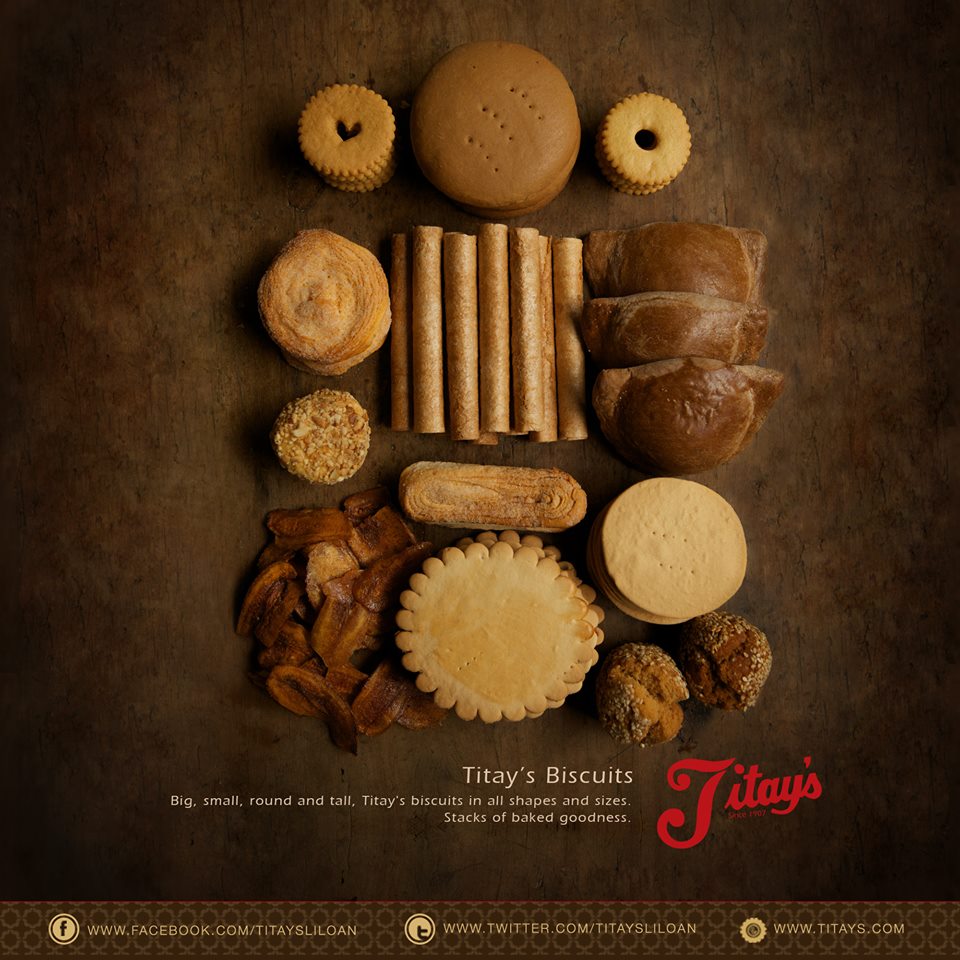 Titay’s new look shows off a good mix of vintage and contemporary designs. The Frasco’s wished to preserve their brand’s rich history all while still being appealing to the modern-day consumers.

Read: Old Restaurants in Cebu that are still thriving today

In Cebu, there are a total of three store locations for Titay’s but the products are also available inside the grocery stores and supermarkets in the malls, as well as on other distribution areas all over the country. Titay’s Liloan Rosquillos and Delicacies, Inc.’s main branch is located in Central Nautical Hwy, Poblacion, Liloan, 6002 Cebu. For more details and inquiries, you may reach them on their telephone no. (032) 564 2993. You may also visit their facebook page – Titay’s.
*Photos are from Titay’s Facebook Page

Whenever someone says the word “Otap”, I am pretty sure that Cebuanos would think directly of this name – Shamrock. For years and years, when we go visit our province in Borongan, Samar; I remember we’d always bring a lot of these Otaps to give out to our relatives and family friends. 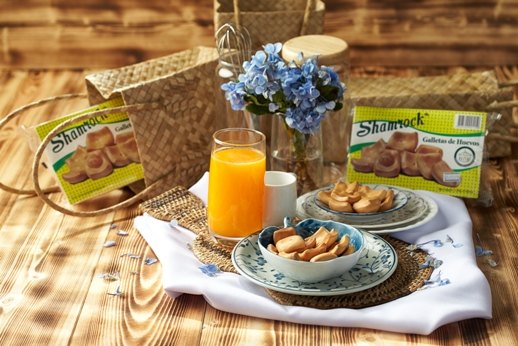 Shamrock Bakery and Restaurant Corporation or more often known as Shamrock – is based in Cebu City with five branches and a good number of distributors and retailers across the country. They are famous and have become a household name in the country for their distinct traditional and freshly-baked Otap and other goodies for pasalubong.

Rooted from Pampanga in Central Luzon, the bakery business is a tribute to the Paras Family tree. The Paras family who established Shamrock moved and resided in the southwest of Cebu, in the town of Barili during the 1930s. 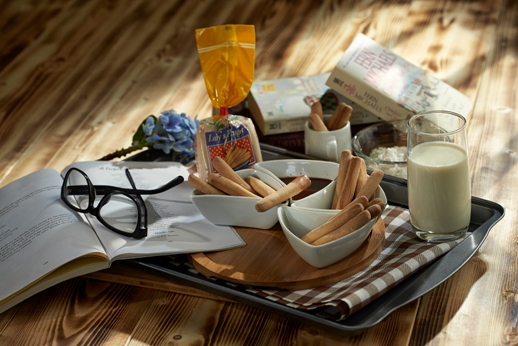 The first ever store of Shamrock was in the old Compania Maritima building in the waterfront area, near the Carbon market and the Cebu City Hall. The modest beginnings of this bakery business are firmly established from its rich history, dating as far back before the War Era. It was originally a union between an Irish businessman and Honoria Paras. 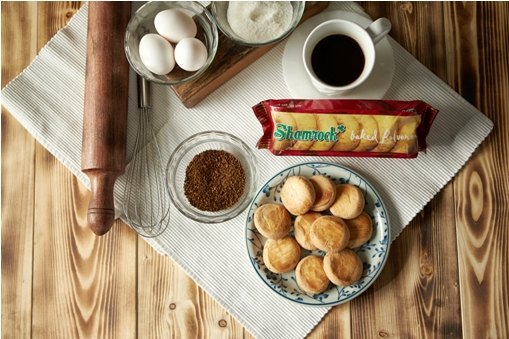 Following the WWII, Honoria Parias carried on with the business in 1945 and the Irish business-partner has already fled. Paras built a bakery at the former Capitol Hotel on Sikatuna Street, Cebu City. Over time, the business moved to a location in the downtown area on Mabini Street alongside the Metropolitan Cathedral, across the old University of Southern Philippines (USP) Mabini Campus. Shamrock was located there until 1982, then the Archdiocese of Cebu advised the business to relocate. Due to the reason that the area was to be converted into a plaza – now known as Plaza Hamabar.

The bakery relocated to Minglanilla and a store was built on space just next to the Plaza Hamabar. In 2009, the store moved to the corner of Mabini and Manalili Streets – where it is situated until today. Their new store offer not only Shamrock baked goodies but also other famous Cebuano products so the customers can do a “one-stop shopping” for pasalubong products.

The Shamrock bakery has also continued to expand in Barili where it all started. A two-story complex that is now a famous bus stop-over for those traveling south of Cebu. They also have extended restaurant operations, rentable spaces around and a small pension on the second level for travelers with business in the area. 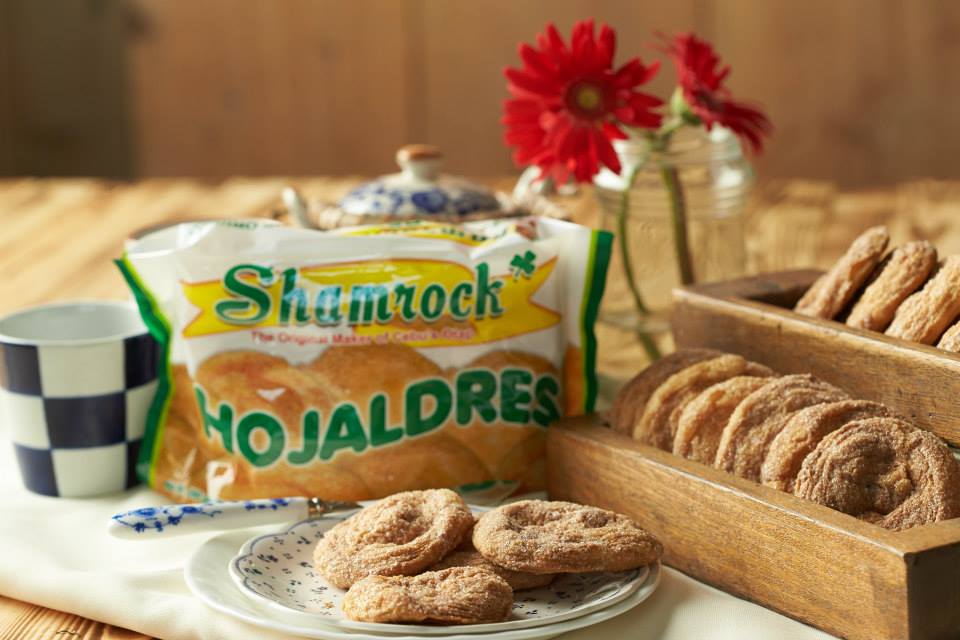 It’s amazing to learn that Shamrock bakery products have gone beyond our borders and has reached Filipinos around the globe. It’s a good thing for them to have a little taste of home through these Cebu delicacies and baked goodies. 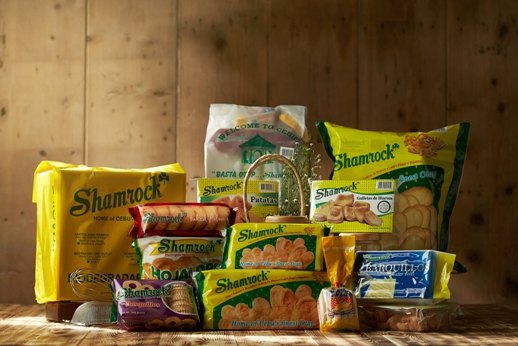 Later on, the company expanded the business by opening other branches within Cebu and Mactan area. In 1990, Sergio Paras Sr. branched out when he built a 28-room Pension House in their property on a 6-level building around the Fuente Osmeña circle. A pasalubong store was built on the ground floor alongside a Chinese food-to-go.
Read: Food That Originated In Cebu

The Shamrock Bakery and Restaurant Corporation is located in Honoria Paras Bldg, Fuente Osmeña Circle, Cebu City, Cebu 6014. For more details and inquiries, you may reach them on their telephone no. (032) 236 9432. You may also visit their facebook page – Shamrock Bakery & Restaurant Corporation.
*Photos used are from Shamrock’s website
I hope these bits of information about the two leading pasalubong centers in the queen city of the south gave you an idea what to bring home with you when you come and visit the island of Cebu! All these delicacies and yummy baked goodies can also be found on all terminals – airports, seaports and at the bus terminals too.
Don’t forget to bring home a taste of Cebu with you. Peace and sweets!

How to Treat Different Types of Headaches

8 Places to Go Shopping in Cebu

Travel back in time at El Gran Baluarte de Boljoon